Gorham Savings Bank, a leading Southern Maine financial services institution, announced today it has broken ground on a 1.1-million-dollar solar array that when complete will offset virtually all of its electricity costs across its 12 branches and several office locations, including its 29,000 square foot Operations Center. 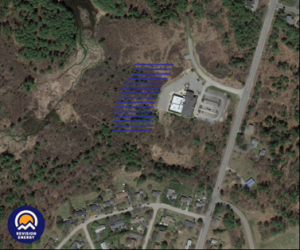 The installation will generate 1 million kilowatt-hours (kWh) annually and be located adjacent to the bank’s Operations Center at 10 Wentworth Drive in Gorham. Maine-based ReVision Energy designed the 866 photovoltaic panel and 5 inverter array.

The system will offset more than 1.1 million pounds of CO2e annually or the equivalent of 59,042 gallons of oil.

The Bank’s first use of solar was its Route One Falmouth branch, built in 2010, which features solar panels on the drive-thru and is LEED Gold Certified, an internationally recognized green building certification.

“I think this initiative is a good representation of how our organization continuously strives to be a force for good in the communities we serve.” said Steve deCastro, president and CEO of Gorham Savings Bank. “Increasing our reliance on clean power alternatives was clearly the right thing to do not just for the bank but for our environment and the community.”

“The Town of Gorham is pleased to work with Gorham Savings Bank through the permitting and construction process to see their strategic vision of investing in renewable resources be realized,” said Tom Poirier, Director of Community Development. 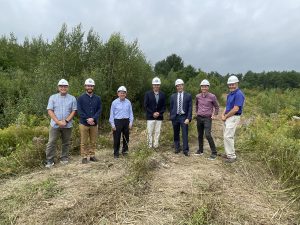 “The Town of Gorham’s Comprehensive Plan outlines a Community Vision of “Gorham strives to be a sustainable community. Gorham supports the sustainability of the environment and natural resources and should be open to considering new technologies or new ideas that enhance the community’s sustainability and improve the living environment.” The Town considers Gorham Savings Bank an important local stakeholder and is appreciative they chose Gorham to enhance their and the community’s sustainability visions with a solar facility.”

The solar array expected to be fully operational by the end of the year.

Maine benefits from a surprisingly strong solar resources because the state’s latitude is identical to famously sunny places like Monaco on the French Rivera, which means that Gorham Savings Bank will derive a strong economic and environmental return on its solar investment. Germany, circled in yellow, has more solar operations than most countries, but their latitude is significantly north of Maine’s. In fact, at roughly noon on a daily basis, solar power accounts for 40 percent of Germany’s energy production. And that’s actually great news for Maine because our state receives 30 percent more sunshine than Germany.