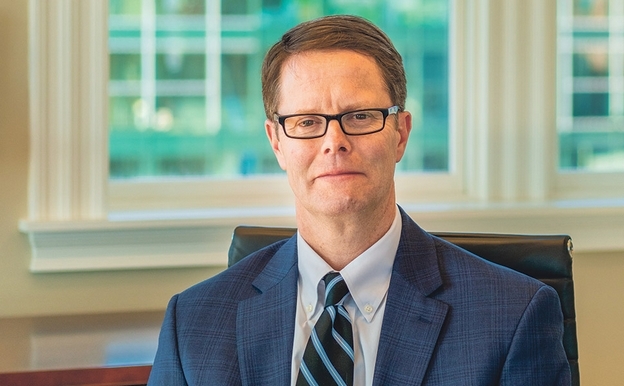 Steve deCastro, On The Record with Mainebiz

Steve deCastro is president and CEO of Gorham Savings Bank, which has over $1 billion in assets, 13 branches in Maine and close to 200 employees.

DeCastro, who joined Gorham Savings in July 2016 and became CEO on Jan. 1, sat down with Mainebiz in the top-floor boardroom at Portland’s Grand Trunk Building, which the bank renovated and now occupies. Below is an edited excerpt.

Mainebiz: How has the transition into your new role been going?

SD: I’ve had the good fortune of having a couple of years to move into this role. My predecessor, Chris Emmons, brought me into the commercial banking group, which gave me a great opportunity to get to know that team. About nine months ago he changed my role so that I became president and he was still CEO. He took care of the internal side of the bank — risk management, human resources and credit — and had me work with the external, customer-facing side. That gave me an opportunity to see more of the bank, all while he was involving me in various committees and the board, all those activities that are now a primary focus for me.

MB: How does your management style compare to your predecessor?

MB: What’s the status of your planned 14th branch, in Yarmouth?

SD: Ford Reiche is the developer for that project, so we’re really happy to partner with him on that. Our goal is to have things open sometime this summer, hopefully before the Clam Festival.

MB: Are you considering other locations after that?

SD: Longer term, we certainly would be open to it, but we’re not aggressively looking.

MB: What parts of the business will be next to be built up?

SD: One initiative we launched last year was called Wealth at Work, a program to provide banking services to commercial clients’ employees. We have programs that provide them with some financial planning and better rates on depository loan products.

MB: What are your immediate hiring plans?

SD: Our commercial banking group continues to grow, so making sure we keep up with that from a resource standpoint is a constant need. When I think about our retail team, there’s more need from a data standpoint helping us understand how we can serve our clients better, so I can see our analytics group having some additions.

MB: Any challenges in finding talent?

SD: It’s really challenging. One of the things I love about Gorham Savings is we really make an effort to try to pull from within for career development opportunities, and there are a lot of examples of that. As an industry, we have not done a great job of training people, and I think there was probably a 10-year period in my career when there were a lot of acquisitions going on and not a lot of employee development.

MB: Has that changed?

SD: It’s much better now, but with the growth in the market and within each organization, it’s hard to keep up.

MB: With all the new players in Portland’s banking market, is that putting pressure on everybody?

SD: It certainly is. Each bank has its own strength, so I don’t necessarily worry about it from a competitive standpoint. We’ve had such vibrant growth in Portland and Cumberland County, but that may change — and it certainly has put a strain on resources.

MB: Is it also important for a 150-year-old institution like Gorham Savings to keep an entrepreneurial frame of mind?

SD: Absolutely. The industry is changing a lot, and it feels like the pace of change is coming faster, and so absolutely, we need to be nimble.