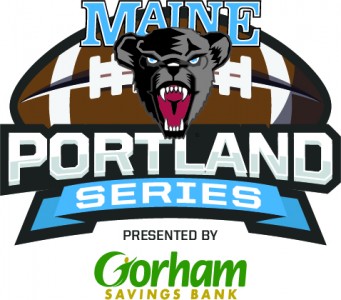 The University of Maine athletics department and Learfield today announced a partnership with Gorham Savings Bank to bring UMaine football back to Portland, Maine for the first time since 2005.

The first game of the partnership will be UMaine’s annual Jeff Cole Memorial spring scrimmage, held at Fitzpatrick Stadium on Saturday, May 6 at 4 p.m. The Black Bears will return to Portland for a regular season date with Colonial Athletic Association (CAA) opponent Delaware on Saturday, Nov. 4.

“We are very excited to play our annual Jeff Cole spring scrimmage and our regular season game against Delaware in Portland,” Harasymiak said. “We would like to thank Gorham Savings Bank for jumping on board and helping us in our quest to spread UMaine athletics throughout the state of Maine. Portland is a great city with passionate fans. Our fans in Orono have done a tremendous job building a fun and exciting atmosphere at home and we look forward to generating that same vibe in Portland. We are thrilled to play in front of new faces and gain some new fans with these games.”

“Bringing UMaine Athletics to greater Portland is a wonderful way to allow fans from this area, who may not make it to Orono as often as they’d like, to see some exciting college games. It’s also a great opportunity to introduce fans, from points north and elsewhere, to all Portland has to offer,” said Chris Emmons, CEO of Gorham Savings. “We’re excited to help bring this UMaine Athletic event to the area.”

“We are thrilled to once again partner with Gorham Savings Bank to bring UMaine Athletics to our wonderful fan base in southern Maine,” said Director of Athletics, Karlton Creech. “The support we receive from Black Bear Nation in Portland is tremendous. We sincerely thank Chris Emmons and his staff at Gorham Savings Bank for their gracious backing over the years in joining us to bring the Black Bears to Portland.”

Fitzpatrick Stadium, a 6,300 seat multi-purpose outdoor stadium, was renovated in 2015 when the city of Portland replaced the artificial turf with a new layer of GreenFields turf.

Single game ticket information, as well as a game time for the November contest, will be announced at a later date.