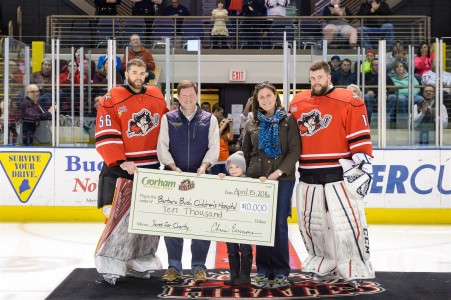 Last year, during the inaugural season,the program raised over $10,000. Pirates Goalie Mike McKenna was so moved by this, he made a significant personal donation as well. In the 2015-2016 season, with McKenna’s remarkable performance, Gorham Savings Bank raised another $10,000.

The check was presented during the last regular season home game on April 15. Sarah Stern, Philanthropy Manager, and former patient Kinsey accepted the check on behalf of the The Barbara Bush Children’s Hospital. Kinsey was in the NICU for just over a month after he was born at only 2 lbs. 8 oz. He is now a strong and healthy 4 year old Pirates fan!

Gorham Savings Bank has enjoyed a long relationship with The Barbara Bush Children’s Hospital, and we are grateful to the Portland Pirates for teaming up with us again this year to help Maine children and their families.