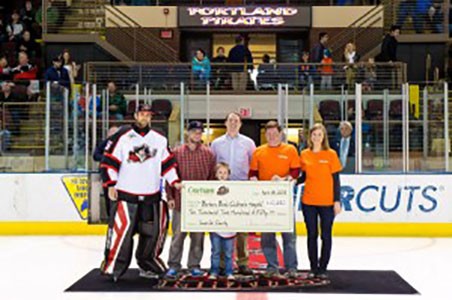 “Saves for Charity” – A special evening at the Portland Pirates

At the final regular season home game this past weekend, GSB’s Chief Banking Officer, Eric Andrews, and Marketing AVP Katie Bellerose, along with Pirates Goalie Mike McKenna presented a check for $10,250 to the Children’s Hospital – who was represented by Matt Parks, Director of Development, Annual and Special Giving, and one of the many beneficiaries at the hospital, Collin and his father Derek.

Collin and his family are huge Pirates fans, but due to Collin’s illness, they had not had the chance to attend a game all season. The Pirates generously donated tickets so they could join us for the game, which also happened to be Fan Appreciation Night! But that’s not all. Collin also was given the opportunity to sit in the penalty box during warm-ups! MMC’s Matt Parks ordered a jersey with Collin’s name stitched on the back, then the Pirates took it a step further and had the whole team autograph it! And just when you thought it couldn’t get any better than this, Matt arranged for a limo ride for the family to and from the game – which was generously donated by L/A Luxury Limousine!

The Bank selected the Barbara Bush Children’s Hospital as the beneficiary of the Saves For Charity program because children like Collin deserve to have the best care available, and his parents deserve the peace of mind knowing their son is in caring hands. The Bank has enjoyed a long relationship with the Barbara Bush Children’s Hospital – whether it’s supporting special programs like Saves for Charity, volunteering at the hospital or the upcoming Color Run, or participating in a variety of fundraising events.

This donation wouldn’t have been so impactful without the amazing skills of Pirates Goalies Mike McKenna, David Leggio, Louis Domingue, Mike Lee, and Peter Mannino who “assisted” with the Saves For Charityinitiative in 2014-2015. The Bank is thrilled to form this unique partnership with the Portland Pirates and to provide this combined support to our community!

Awaiting our on-ice presentation – with GSB’s Eric Andrews, MMC’s Matt Parks, and Collin and his father.